Say what you want... Manny Pacquiao is no joke. 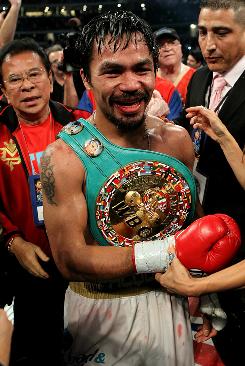 Manny Pacquiao, 8 times World Champion, put on a clinic tonight. Beating Antonio Margarito with a steady barrage of punches that literally didn't let up until the last round.

And that only happened because the small Filipino tornado was showing mercy. Pacquiao won by unanimous decision but in reality the fight was won by the sixth round. Margarito had flashes of brilliance and connected a number of times but every time he would get on a roll, Pacquiao would come back and answer him.

And that's what I really admire about Pacman. The man  has heart in the ring. No matter how many good shots Antonio got in (and he got in a good number) Pacquiao would take it, absorb it then come back with a vicious flurry. Striking back with three, four and five punch combinations all while continuously moving laterally so Margarito would receive an onslaught from various angles.

From the first round to the eleventh, Pacman's punches were blindingly fast, accurate and mostly aimed at his opponents right eye. Which was closed by the 9th round. You can tell the fight was lopsided by the commentators topic. For the first five rounds they were marveling at the performance of Pacquiao. In the sixth and seventh and eighth rounds they were talking about how important it to see a Mayweather/Pacquiao match up even thought the eighth round was arguably Margarito's most effective. In the  ninth, ten and eleventh they were calling for a stoppage of the fight by either the ref or Margarito's corner.


The only thing left for Champion and now politician is to take on Mayweather. I haven't decided whose causing the delay, Mayweather, by asking for more stringent than the rules require blood testing or Pacquiao for refusing to test closer to the fight day than normal for what seems like superstitious reasons.

In any case I would love to see that fight take place while both warriors are at the top of their game.
Posted by Nic Rellek