The Google+ Circles Love Story commercial is f*cked up, here's how...

Here is a commercial that shows a relationship that's a complete ratfuck*.

First we see Kyle who goes all in apparently from the first meeting with Lisa. He puts her in the "Love of My Life" circle from the jump. No ambiguity here. Kyle is in love with Lisa. We're done with Kyle now, he and we are just waiting for Lisa to come to the same conclusion.

If PSU wins the game the players should not give Paterno the game ball!

Former Penn State receiver and running back Rich Mauti organized what he hopes will be one of the largest gatherings of former Nittany Lions players to stand on the sideline ever, in an effort to show support for their embattled program.

Mauti sent emails to more than 800 former Nittany Lions and asked them to attend 12th-ranked Penn State's home finale against No. 19 Nebraska on Saturday. He wants players who took pride in wearing the school's classic blue-and-white uniforms, and fondly represented their university years after they played their final down, to return their thanks to a program -- not just former coach Joe Paterno -- that gave them so much.

By midweek, Mauti said about 75 players had agreed to attend.
"It's for the kids that have to go out there on Saturday," said Mauti, who played under Paterno from 1974 to 1976 and went on to play in the NFL. "It's a show of support for that. It's not going to be banners and flags and bands. It's going to be the Penn State Way. It's going to be our presence. Hopefully, we get enough guys there that will mean something."
Mauti emphasized he's not forgetting or minimizing the scandal and possible cover-up centered on former defensive coordiator and one-time head coach heir apparent Jerry Sandusky.

Paterno and university president Graham Spanier were fired Wednesday in the fallout of a shocking grand jury report alleging repeated, illicit contact between Sandusky and boys as young as 10.
"I'm not condoning any activities that have been alleged. That's not the purpose," Mauti said. "I'm trying to get everyone that has been through that program, that has had a positive experience, to support the kids and the program and the school at this juncture."
Former Penn State linebacker Buddy Tesner said he will be there to watch a game between two teams jostling for a Big Ten divisional title. Tesner played from 1971 to 1975 and went on to found the Football Letterman's Club.

"I think it's a great idea to rally the troops to support the team as much as anyone else," Tesner said. "At the same time, we're being very careful to make sure that we respect and understand the families that have been affected by all this. We're not making a statement of innocence or guilt."
No, but another former Nittany Lion said he hasn't forgotten Sandusky, even as the former assistant coach stands accused of having sex with young boys.
Sam Stellatella, a three-position player in the 1950s, has donated money to Sandusky's defense and urged other former players to do the same.
"I told him he's going to need a million dollars to defend himself," the 73-year-old Stellatella said. "He called me back and said, 'What am I going to do with this money?' I said, 'Use it for your lawyer because you're going to need it.' "

Stellatella sent Sandusky $100. He wrote personal letters to other members of the 1959 Liberty Bowl team that defeated a Bear Bryant-coached Alabama team and asked they also donate. He does not know how much money was raised.

"I know some of the guys sent money," Stellatella told The Associated Press. "Here's the thing, these are horrendous charges against him. But he's still entitled to his day in court. Everybody's prejudged him. He's done horrendous damage to Paterno and (athletic director Tim) Curley and the football program. I don't listen to the news and I don't read the reports of what he did because I would get too upset.

"But he's still entitled to his day in court."

That's a lone stance among a group of players who have been quick to distance themselves from Sandusky.
Brad Benson, a former Penn State offensive lineman who won a Super Bowl with the New York Giants, was not invited to attend the game. He said he wouldn't go anyway -- and had no problem with his fellow former Nittany Lions presenting a unified front -- as long as they remembered the true victims of this case.

"I sure wouldn't want it be a show of solidarity for Joe," he said.

Benson spoke in anger about Paterno's actions and, more troubling, the reaction of unruly students who toppled a television news van, rioted and attempted arson after a peaceful demonstration Wednesday night turned ugly.

"There are people right now that are supporting Joe. They are rioting and doing things they shouldn't be doing," he said. "I equate these students that are rioting to the occupiers on New York City right now. They're not mature enough to understand why they're rioting. They weren't there when this happened. What are they protesting? They're protesting that someone with a tremendous responsibility failed to fulfill his moral responsibility, and other people failed as well."

Sources told ESPN that as a way to possibly honor Paterno, some current Penn State players have discussed bringing a game ball to the fired coach's house if the team defeats Nebraska.

The Penn Sate Rioters need to grow the hell up!

As thousands of students crowded the streets around the Penn State campus on Wednesday night, protesting the University’s decision to fire beloved football coach Joe Paterno, the mob quickly chose a common enemy: the media.

Nearly 100 members of the media were at the Penn Stater Conference Hotel covering the board of trustees’ announcement when word quickly spread of a student demonstration developing nearby.

Following the press conference, local reporters as well as news crews in from Pittsburgh and elsewhere rushed to downtown State College, where a growing mob of students had gathered.  And things quickly turned ugly.

“At first, the students were just milling about peacefully, but, as time went on, the crowd grew more unruly and more destructive,” WPXI‘s Courtney Brennan told TVSpy today via email. “I don’t know why, but the crowd’s anger over the firing of Paterno…quickly turned into hatred of the media.”

A group of demonstrators teamed up to tip over a WTAJ news van, escalating the protest to a full-blown riot and sending journalists running for safety.

After the WTAJ van was tipped, protestors targeted other satellite trucks parked in the area and began throwing things at nearby reporters and photographers.

“Students kept shouting threats at us and kept saying they were going to tip our satellite truck next,” Brennan recalls.  “My photographer, Mike Drewecki, was pelted with bottles, rocks, mud and other objects.”

“This is not ‘news exaggeration,’” WTAE sports anchor John Meyer tweeted last night while covering the student unrest.  “We witnessed a riot tonight on College Ave.”

Although a handful of stations had their equipment damaged in the riot, there were no major injuries to report.

“Going to Penn State and seeing riots in the past, I thought I was prepared,” Boyer told TVSpy this afternoon via email, following a 24-hour shift.  “But I could not believe all the blame and focus on the media.  There were multiple times I was concerned about our safety.  I kept telling our other reporter it felt like we were reporting in another country.  You never expect to be concerned about your safety and students wanting to harm you or your car so it was something I never experienced before.”

Brennan summed up how the media navigated the hostile situation when she tweeted to a colleague early Thursday morning, “It’s in our blood, babe…we can handle ourselves in this kind of stuff.” 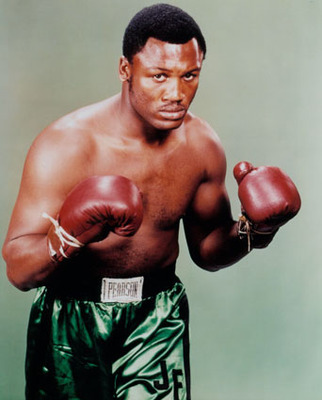 I find it incredible that Sylvester Stallone can be honored in the Boxing Hall of Fame for creating the fictitious perpetual underdog Rocky and Philadelphia celebrates that achievement with him but a real boxing legend who has represented Philadelphia honorably for decades doesn't get the same treatment. What I'm talking about specifically is that there is no statue immortalizing the boxing champ who floored Muhammad Ali.

Joe Frazier was a true American Dream come from nothing and work your way up story if there ever was one. Stallone said that people accept Balboa as authentic, they should parts of Rocky's character are based on Frazier's life: Frazier eventually took the Greyhound bus, "the dog", from the South to Harlem. He ended up working in a Philadelphia slaughterhouse. "I was the drain man. My job was to make sure the blood went down the drain. But sometimes, early in the morning, I'd go down that long rail of meat and work on my punching. That's how [Sylvester] Stallone got the same idea for Rocky - just like he used the story about me training by running up the steps of the museum in Philly. But he never paid me for none of my past. I only got paid for a walk-on part. Rocky is a sad story for me."

Frazier has not only represented Philadelphia in champion fashion but the whole damn country as well. He was the only boxer to win a gold medal in the 1964 Summer Olympics in Tokyo.

Granted Joe Frazier wasn't as outspoken politically or charismatic as Muhammad Ali but revisionist history would have you believe that Ali was always beloved and sainted. The reality is Ali was hated by most and seen as arrogant and conceited by those who didn't despise him (my mother couldn't stand Ali's arrogance and constantly referred to him as Cassius Clay up until the mid 80s). Joe Frazier chose to not be outwardly political and for that he was cast not only as an opponent to Ali but as a villain. Their clash wasn't just as athletes but as representatives of opposing forces in a socio-political battle. To root for Muhammad Ali was to side with the "People". And if Ali was for the people then Joe Frazier obviously had to be for the "Man", the "Old Boy Network. And that's where, I think, things went in another direction for Smokin' Joe.

A combination of lack of self promotion, naively believing that good hard work would be appreciated and recognized and racism (how much or little of a factor it plays is debatable but its in there somewhere) seems to be responsible for the marked lack of recognition of the work and representation Frazier has done for the city of Philadelphia. Unfortunately its too late to honor Frazier in life but the city can still correct its oversight by commissioning a statue dedicated to the man who showed more love for his city and country than it showed him. 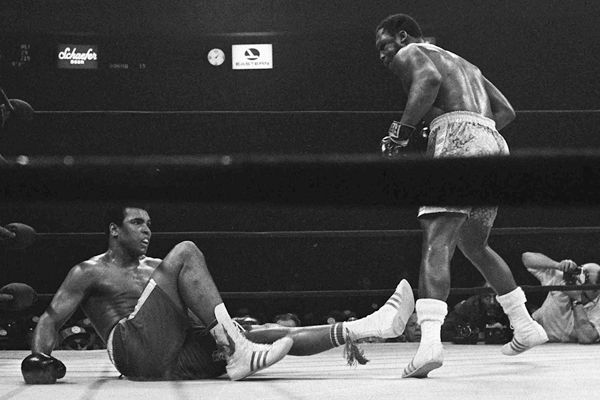