Faux Controversies At The Oscars: The nipple-slip and black face that wasn't

It must be another slow news day...

Billy Crystal comes back to host the Academy Awards and does his usual great job of it. Although the 3 hour running time makes the ceremony a slog no matter who's MCing the shindig. And of course there are skits and jabs galore to punch up the pace and keep all of us from falling asleep before the good categories are called up. And one of those skits was a parody of  Woody Allen's film Midnight In Paris where  Sammy Davis Jr (Crystal in make up) makes an appearance.
This morning I see articles about a backlash and tweets from various people on the "black-face incident" at the Oscars. If you can't see the difference in these two images: 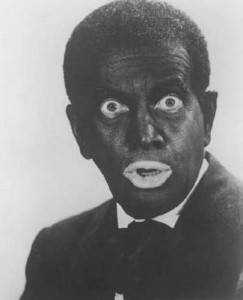 Then the issue is with you..not Billy Crystal for doing an impersonation of a real person.

Now on to the other ridiculous "controversy"...

Jennifer Lopez was presenting an award with Cameron Diaz and supposedly has a wardrobe malfunction. From the looks of the picture there barely anything showing that I can see.

I guess the areola is part of the nipple and seeing a fraction of that could be in the loosest terms a nipple slip...no on second thought its not.

Like I said..must be a slow news day on the internet.
Posted by Nic Rellek