Romney-Ryan or should it be Ryan-Romney?

Mitt Romney has chosen his Vice Presidential candidate and its Wisconsin Congressman Paul Ryan. In introducing Ryan his running mate, Romney accidentially said, "Join me in welcoming the next president of the United States, Paul Ryan."

Now to be fair, Obama did the same thing when he announced Joe Biden as his running mate back in 2008. But he didn't take as long to correct himself. But here is my point with his gaffe, every pundit and commentator who has an opinion on Romney's choice are all saying the same thing: Paul Ryan brings vision and a plan to the ticket.

I thought the Presidential candidate was suppose to do that.

All the talk is about Ryan's budget and Ryan's idea for medicare. How Ryan can articulate his position in detailed fashion and what Ryan brings to the table in terms of clarity and decisiveness. These are things not spoken of Mitt Romney in such glowing terms and he's been running for President for the last year and half and this is his second attempt at the title.

Romney himself sounds like he's looking for a leader more than number 2 with his comment: "I don't think I have anything for you on the V.P. running mate. Other than I-- I certainly expect to have a person that has a strength of character, a vision for the country, that, that adds something to the political discourse about the direction of the country. I mean, I happen to believe this is a defining election for America; that we're going to be voting for what kind of America we're going to have."

It's the President's job to have a vision of the direction the country should take. It's the Vice President's job to complement it. The other thing that's interesting to me is that Romney so far has not run on his experience as a governor but as a businessman. But I guess he has to when his signature achievement as a governor is expanding socialized medicine in his state. Something the GOP was happy and proud of all the way up to the second the President used it as a basis for the Affordable Care Act. Now its anathema to them and one less thing Romney can use to prove why he's the better candidate for the job. The only problem with his running as CEO-in-chief is that you can't run a country like you run a hedge fund. This isn't the United States of America, LLP.

The President ultimately is a politician not a business man and his decisions and actions have to be based on what's good for the country not just a board of directors or investors.  Also the biggest knocks against Obama that Romney makes are his lack of business experience and shortsightedness due to only being a politician then he chooses a person with those same issues to be one heartbeat away from the Presidency should he win and is no longer able to do the job.

So far Mitt Romney has yet to articulate his own vision for the country or even his policies. And even though its only been a couple of days since the announcement, because Romney has avoided specifics all this time it seems he's content to let his running mate define his campaign and message. And that's not the mark of a good leader.
Posted by Nic Rellek No comments:

After coming up with silver McKayla was right next to the gold medal winner and barely made a move to accept a hug from her then the bronze winner went in to hug her and she straight up IGNORED her.

I can understand her disappointment in losing what everyone thought was lock for her but there's no excuse for that. 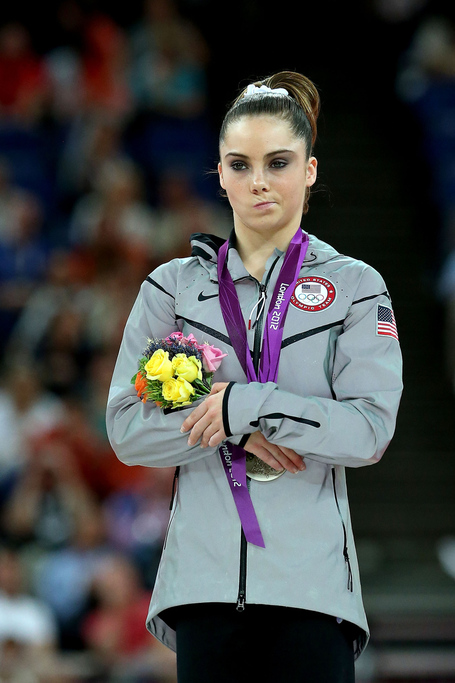